The island is the remnants of an ancient huge volcano, crumbled and worn down. Kauai is known as the Garden Island for a reason. Mt. Waialiali is known as the wettest spot on earth and daily the clouds gather around her ancient shoulders and release abundant amounts of rain which the countless waterfalls and streams deliver to the sea.

Kauai was originally inhabited by Polynesians who arrived in dug-out canoes centuries ago after sailing across the great and perilous open ocean from the southern Pacific, guided only by the stars and ocean currents (and some say by memories of their distant past on the continent of Mu).

In small handcrafted boats and outrigger canoes, they carried food and water for the journey and seeds and plant seedlings for their future, not being sure how hospitable their new home might be. Well, the Hawaiian Island chain, where they made landfall around 1200 AD, was very hospitable indeed, with rich volcanic soil and ample sunshine and rainfall. They established their own isolated civilization, customs and farming techniques, and proceeded to flourish with their taro, breadfruit and sweet potatoes. Life was sustained for generations with few interruptions from outside influences or invaders, and those original foodstuffs played an important and nourishing part of the Hawaiians lives and diets right up to the present time. Taro even served as an integral part of their religion and mythology. Crude implements and sophisticated family and social structures eventually created an island Kingdom, that after discovery by Western society was recognized as a sovereign nation on the world stage. 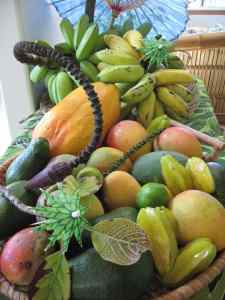 When Captain James Cook of the Royal Navy arrived on that fateful day in 1778, Kauai was introduced to the good, the bad and the ugly. Its a history worth knowing... It is a very political history, with many dubious deeds and characters, and the ramifications of the events of over a century ago still reverberate around the islands. In a nutshell, what happened was that after Captain Cooks discovery of what he called the Sandwich Isles (after the English Earl of Sandwich), the British, the Russians, and the Americans all vied for favor with the King. Money was passed, favors were granted and much of Hawaiis prized lands were bestowed upon privileged advisers and lobbyists.

After the ships of discovery came the ships of commerce, carrying goods from around the globe, and carrying off sandalwood, koa and other natural resources. Then came the fishing vessels and the whaling boats, and Hawaii, with Lahaina on the island of Maui as the center of activity, became the new wild west. Of course, with all of this riffraff whaling and carrying-on, the missionaries were the next to arrive, and spent many many decades attempting to impose their moral order on the land and its (heathen) inhabitants. All was relatively well for a while, with the Hawaiians attempting to adjust to the newcomers, and their diseases and mosquitoes, and the newcomers attempting to adjust to a new life in the tropics. As more businessmen, bankers, ranchers and farmers from America began crowding in, the major players banded together, and with a little help from the merchant marines stationed in the harbor, they lobbed a couple of shells into Honolulu, stormed the palace and captured and imprisoned Queen Liliokalani. After a poorly organized attempt by the Hawaiians to retake the Palace was put down, the coup detat was complete. The Americans had, in fact, performed the very first pre-emptive strike against a sovereign nation. The year was 1893. 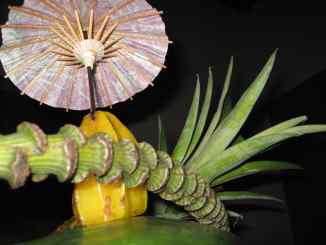 This is a part of Hawaiis history that you dont hear much about, but in 1993, President Clinton issued a formal apology for those acts of 1893, a hundred years earlier. I am certainly no expert in this area, but there are numerous books and articles that could be researched if you wanted to learn more about this phase of Island history. Hawaii soon became a Territory of the United States, and in 1959 became the final state to join the Union.

Through conniving and politics, much of Kauai's tillable land became filled with sugar cane and pineapple. Massive private plantations and workers quarters were constructed, and the need for cheap conscription labor led to a search of all parts of the globe to find men who would toil in the hot fields. Manual laborers from China, Portugal, Japan and the Philippines arrived with their own cooking styles, techniques, pots, utensils, even plants and spices so they could have their customary ingredients. Today, Kauai's food scene is an eclectic mixture of the influences of all of these diverse cultures. Mixed plate indeed. Small mom and pop eateries serving Mixed Plates are very popular all through the Islands. A plate lunch usually includes 2 scoops of rice, potato-mac salad, kim chee, and fresh grilled meats and fish.

Today the sugar in the fields has all but disappeared, but we have been blessed because of all of those fields of vibrant green that have blanketed the slopes of Hawaii for decades. The challenge now is to find ways to keep our mountain slopes green, while the massive acreage is being filled with housing developments, resorts, gated communities, ranches, and independent farms.

With about 50,000 full-time residents and 1,000,000 visitors yearly, Kauai needs to limit future growth so that Kauai stays rural and charming.

From Kauai Insider to Maui Insider